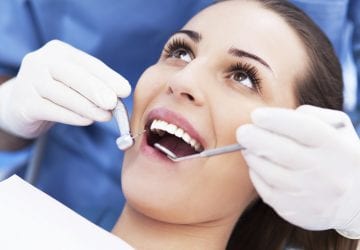 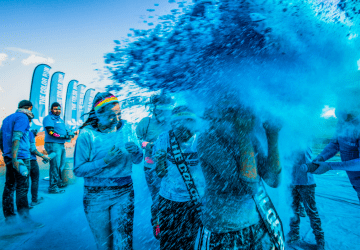 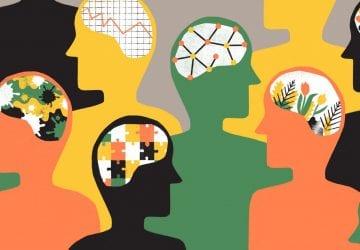 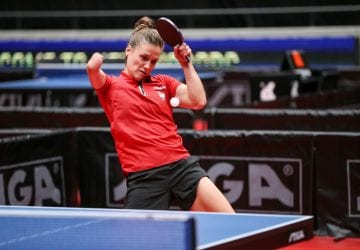 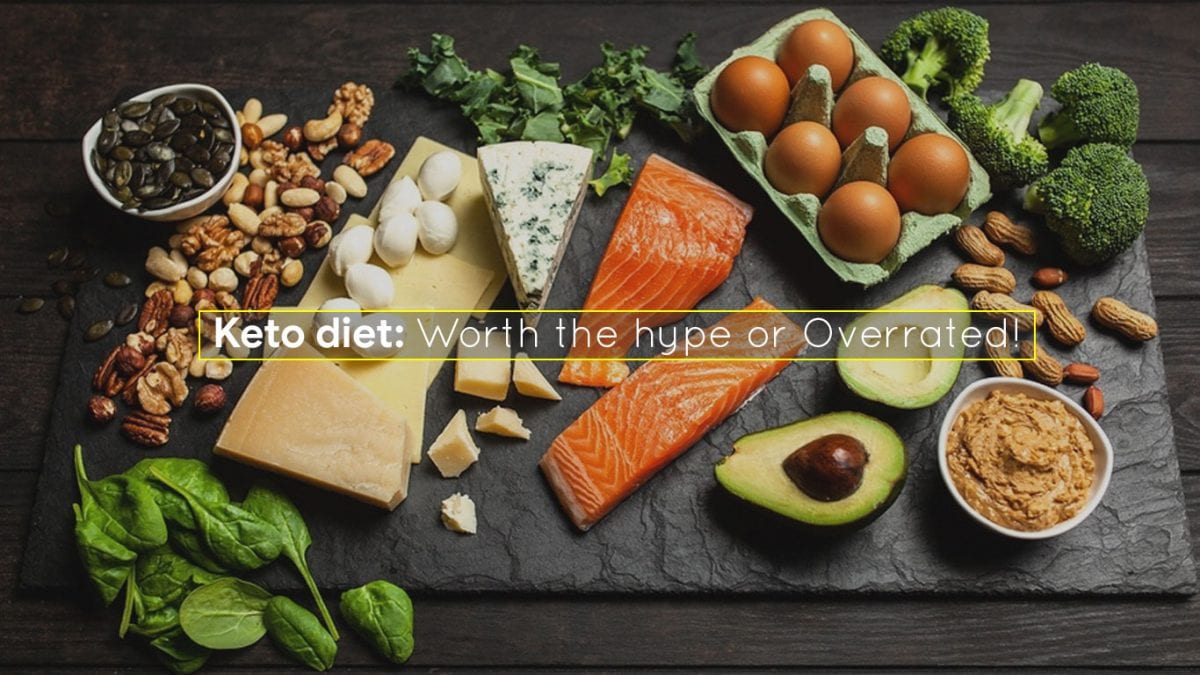 The ketogenic diet has been the focus of public attention for the past few years. Most likely because of the efficient fat loss claims and associated health benefits. However, the keto lifestyle has also been the subject of criticism because of being highly unconventional and difficult to adhere to. Moreover, fitness enthusiasts have a mixed opinion on the subject as well. So, is the keto diet really superior to other fat loss diets? Read along to find out.

What is the ketogenic diet?

The ketogenic or “keto” diet is essentially a low-carb, high-fat and moderate protein diet. It was formerly introduced as an effective therapy to treat medical conditions like epilepsy during the early 19th century.

The diet has also been used to control type-2 diabetes as it leads to improved blood sugar levels and consequently reduced need of insulin. However, the keto diet is majorly used as a tool for fat loss at present times.

How is it different from other low-carb diets? 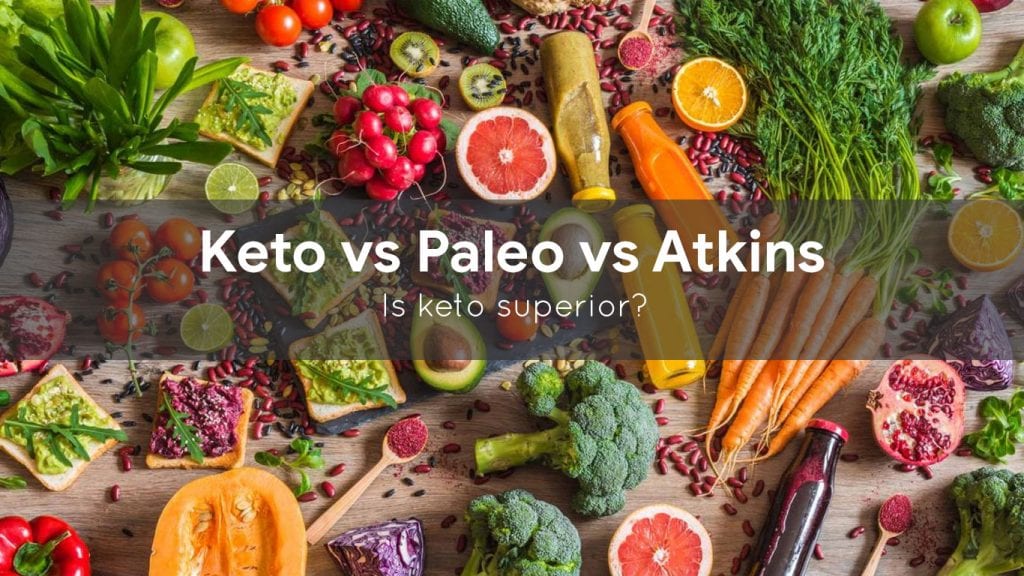 Many other popular low-carb diets are often confused with the keto diet. Some of the frequently discussed diets include the Atkins, paleo and dukan diets. These are all low-carb and moderate fat diets. Contrasting to which the keto diet is a low-carb and substantially high-fat diet.

The typical breakdown of calories on a keto diet is 80% from fats, 15% from protein and 5% from carbs. The breakdown may vary from individual to individual depending upon their body composition and health concerns. The carb intake however should be restricted to a maximum of 50 grams a day, majority of which should be derived from nuts and vegetables.

How does it work?

Our bodies typically derive energy form glucose (a catabolized unit of carbohydrates). When you deprive your body of carbohydrates, the body is forced to tap into an alternative mechanism of energy production. Hence, fat reserves are oxidised to produce ketone bodies (an alternative fuel) to compensate for daily energy expenditure.

During the initial days of the keto diet, stored glycogen in the liver and muscle tissues is used up. Once the glycogen reserves are depleted, the corresponding amount of water held is flushed out resulting in a massive weight drop. However, any of the lost weight isn’t in the form of fat up until this stage.

Once, all the stored glycogen is used up, the body enters the ‘ketosis’ phase. This can take anywhere between 2-7 days. Once this stage is achieved, the body uses fat as its primary source of energy. However, to lose stored body fat, the individual must stick to an appropriate caloric deficit.

A potential pitfall that makes it difficult for people to adhere to the diet is the ‘keto flu’. It is a phase where individuals may notice irritability, fatigue, lethargy, nausea, dizziness, mood swings and other unpleasant symptoms. It usually begins within a day or two of elimination of carbs and can last for a few days to weeks. 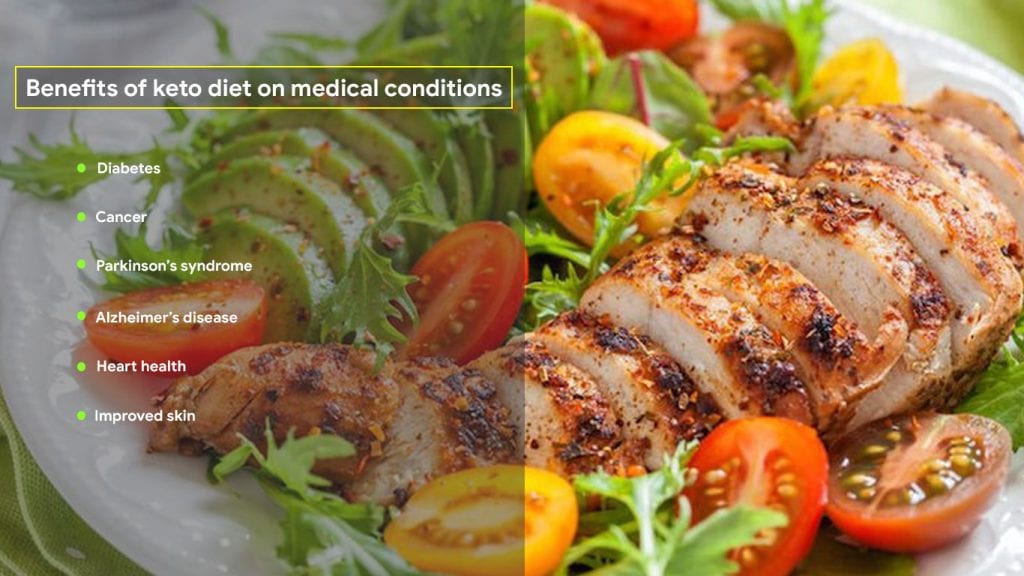 Diabetes: individuals with type-2 diabetes experience a substantial reduction in blood sugar levels upon following a ketogenic diet. This leads to reduced needs of insulin. A sustained low-carb diet can potentially reward a diabetic with discontinuity of medications.

Cancer:  Some scientific studies have suggested that a ketogenic diet may aid in the treatment of some types of cancer if coupled with generic treatment procedures like chemotherapy, radiation and surgery. Animal testing revealed that ketogenic diets can significantly hamper the progression of already metastasized tumour.

Parkinson’s syndrome: Parkinson’s syndrome is a neurological disorder with symptoms like stiffness, impaired posture and difficulties in daily activities. Some studies reveal that a ketogenic diet may be helpful in easing the symptoms when coupled with other therapies.

Alzheimer’s disease: Alzheimer’s disease is a yet another neurological impairment characterized by progressive dementia. The disorder accompanies severe symptoms like memory loss, delusions and hallucinations. The symptoms can be reduced to a certain extent with the help of a keto diet and other complementary therapies.

Heart health: There are established studies that suggest following a ketogenic diet can significantly reduce LDL or bad cholesterol. This feat will eliminate many potential heart complications. However, following a healthy approach is essential. Comprehensively, choosing healthy fats over processed fats makes all the difference.

Improved skin: Stubborn acne all over the face can be a cause of unaccounted blood sugar fluctuations. Switching to the ketogenic diet will essentially reduce the blood sugar and hence insulin levels. Along with reduced acne, the skin becomes more radiant.

Is the keto diet more effective than other calorie deficit diets?

A successful fat loss transformation boils down to a sustained caloric deficit. So, slightly overweight individuals can lose fat with a flexible dieting approach without being very specific with their macro split. You can use this keto macro calculator to easily stay on top of your macros.

However, if your goal is to prevent muscle mass while losing body fat, you might want to specifically hit your macronutrient targets as well. A ketogenic diet might be superior for people who intend on losing a large amount of weight. Sticking to the keto diet might give such individuals faster and more efficient results.

A recent study in particular, mentioned that people following a keto diet can lose weight up to 2.2 times faster than individuals on a low-fat diet with similar calorie constraints.

There is nothing magical about the keto diet. You only lose weight corresponding to the calorie deficit your body is in. However, it is an efficient way to lose fat as your body transacts energy requirements in terms of fat for the whole time.

Moreover, following a high-fat diet is extremely satiating. So, reduced hunger and cravings can individually play crucial roles in a successful fat loss journey. But then, the keto diet even poses its lows during the initial transition period. So, it’s not all sunshine and roses.

The motivated state of mind can often be delusional. Adherence to any particular plan is the key factor to produce results. You are only advised to follow the ketogenic diet if you have the resources and determination to adhere to it for long enough.

5 Tips To Make A Career In The Healthcare Industry

7 Reasons You Should Have Your Own Gym 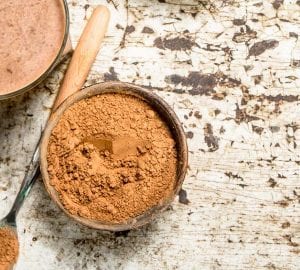 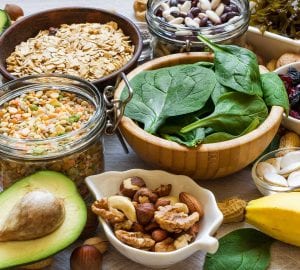 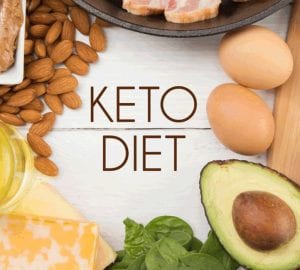 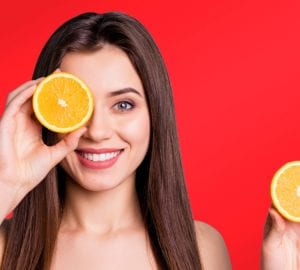 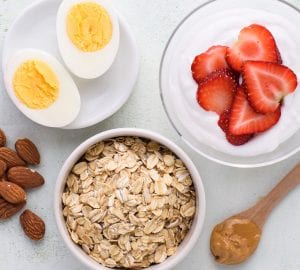